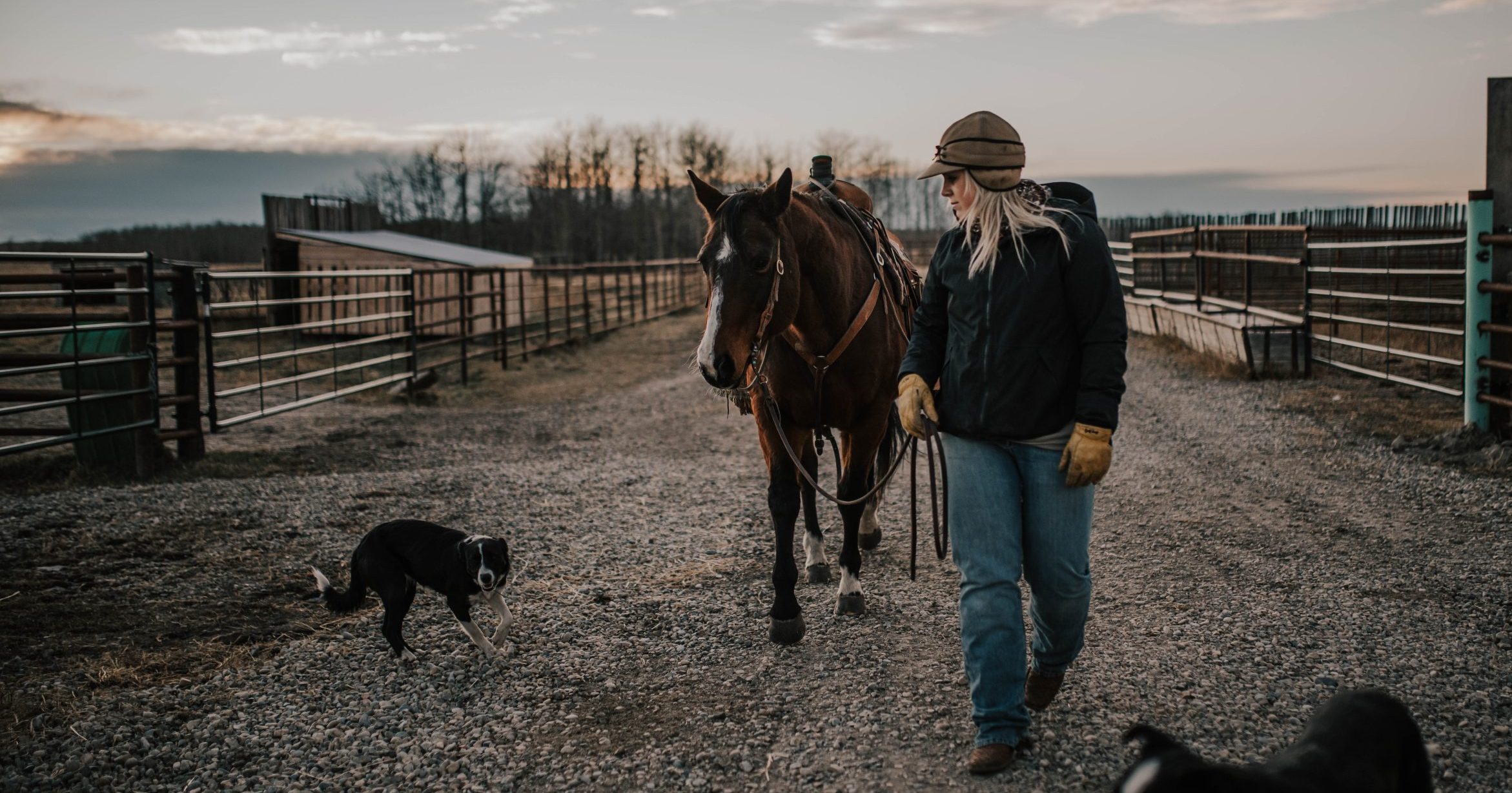 There’s more than one kind of branding going on at the MGM Cattle Company, and that’s just the way Meghan Marshall likes it.

She’s a busy Mom and ranch hand, but throws her own unique enterprise into the mix, to make for a full and varied life she wouldn’t trade with anyone.

The family’s livestock brand is the running M symbol, but the Running M Brand has also come to represent Marshall’s own business, and her social media presence, sharing their family’s story of being part of Alberta’s beef business.

Meghan and her husband Garnet have some 800 head of cattle around the ranch. They’ve created a real market niche by calving out 500 heifers each spring, then selecting and selling the most suitable mother cows in an annual December bred female sale. That’s alongside having their own cow herd, plus Garnet works at his family’s Marshall Feedlot, just outside Bowden.

While Meghan had grown up near High River in a rural lifestyle, she wasn’t directly involved in ranching. But her horse passion led to high school rodeo and roping, and then on to Olds College, where she earned an applied agriculture degree. That’s also where she met Garnet, who was active on the rodeo team as well.

“He’s just a natural with a rope,” says Marshall.

While it’s up for debate about who caught whom, the two wound up together in ranch life.

As they were establishing their cattle operation, they were also building their family, at a breakneck pace. Their three daughters were born within three years. And that meant Meghan spent a lot more time indoors than she was used to.

“When the kids were little, and I was stuck in the house, it felt like the same day over and over again,” she confesses. “Diapers and milk and cleaning dishes and doing laundry, and you feel everything you were doing was getting undone, within minutes!”

Searching for a creative outlet to break the cycle, Marshall remembered a family treasure.

“My Grandma and my Dad had passed six days apart, so that was a roller coaster of emotions. But when Grandma had passed, I got her serger. It sat in my basement for four or five years. Then I finally just needed something more I could do in the house, while still watching the calving camera, and the kids.”

While sewing started more as ‘therapy,’ it quickly also became a way to contribute to their family, as she hit upon an idea that was a real fit for their lifestyle.

“Something that interests me always is the cowboy way of life, so I thought ‘you know, I could probably make some wild rags.’ It was just something I could DO.”

What started out as useful gifts to friends and family soon were in demand, so she set up a website and began to market through social media, offering fun western prints and even kid-sized wild rags.

When she was trying to come up with a company name, it came to her to use their livestock brand, and call it Running M Brand.

Marshall loves the flexibility of being able to work on her own time, around her family and ranch duties. For the first few years, wild rags were all she did. But as a true southern Albertan, she’s always conscious of the wind and protecting her family’s ears, so she came up with the idea of creating a headband. She began marketing those this year, and they’ve really taken off, with a neighbour using her scraps to make hair scrunchies, which she also sells.

“It’s really rewarding that I’m still at home. I’m still looking after the kids, making supper, doing laundry – all those things that the ranch wives are home doing, checking the cows, checking the waterers… but I have something for myself that I’m contributing, to help out.”

“The worst part,” she chuckles, “is Garnet says ‘oh good, we can buy more cows now!’”

“But it’s very rewarding knowing that he’s proud of what we’re doing, and it’s a way to add to the dream of the ranch and land and cows that he’s always been part of, and I always dreamed to be part of,” she smiles.

Living the dream hit a life challenge two years ago, when Meghan was diagnosed with a type of leukemia.

“You never think it’s going to be you. It was an eye opener.”

Fortunately, most of Marshall’s treatments could be taken from home, so she didn’t have to do extended hospital stays away from the ranch and her family.

“That was definitely the scariest part of it. I can easily take a pill a day and deal with a couple of side effects, because I’m still getting to do everything I love, and have a completely new appreciation for all of it.”

With the medication, her blood levels are balanced and the leukemia is in remission.

“It worked out, and every day I’m very thankful that it did.”

Marshall has found social media to be both an effective marketing tool for her business, as well as an outlet for her stories. Through her Instagram posts, she shares glimpses of her life on the ranch – both good and challenging days.

“I don’t want people to feel like I’m just trying to sell them something. I want them to see the kids growing up on the farm, and the effort and work we put in when we just love doing it. I’ll share branding photos, so people understand now what a brand is, and what it means, and this is what we do for a living.”

Marshall has developed a real following and has built connections and marketing her products with both agricultural and non-rural people across the country and into the U.S., who have come to recognize and love the Running M Brand as a symbol representing western initiative, tradition, practicality, and inspiration.

“I don’t want anybody to think I have it all together, or it’s not hard with three kids and all these cows. I try and be real about it, and vulnerable and honest. Social media allows me to do that. I appreciate them following along and investing that time in me too.”

“We had agreed that when I started sewing that family and the farm will always come first, and sewing is my extra. I’m just really happy that I can encourage and inspire people, because they’re doing the same to me.” 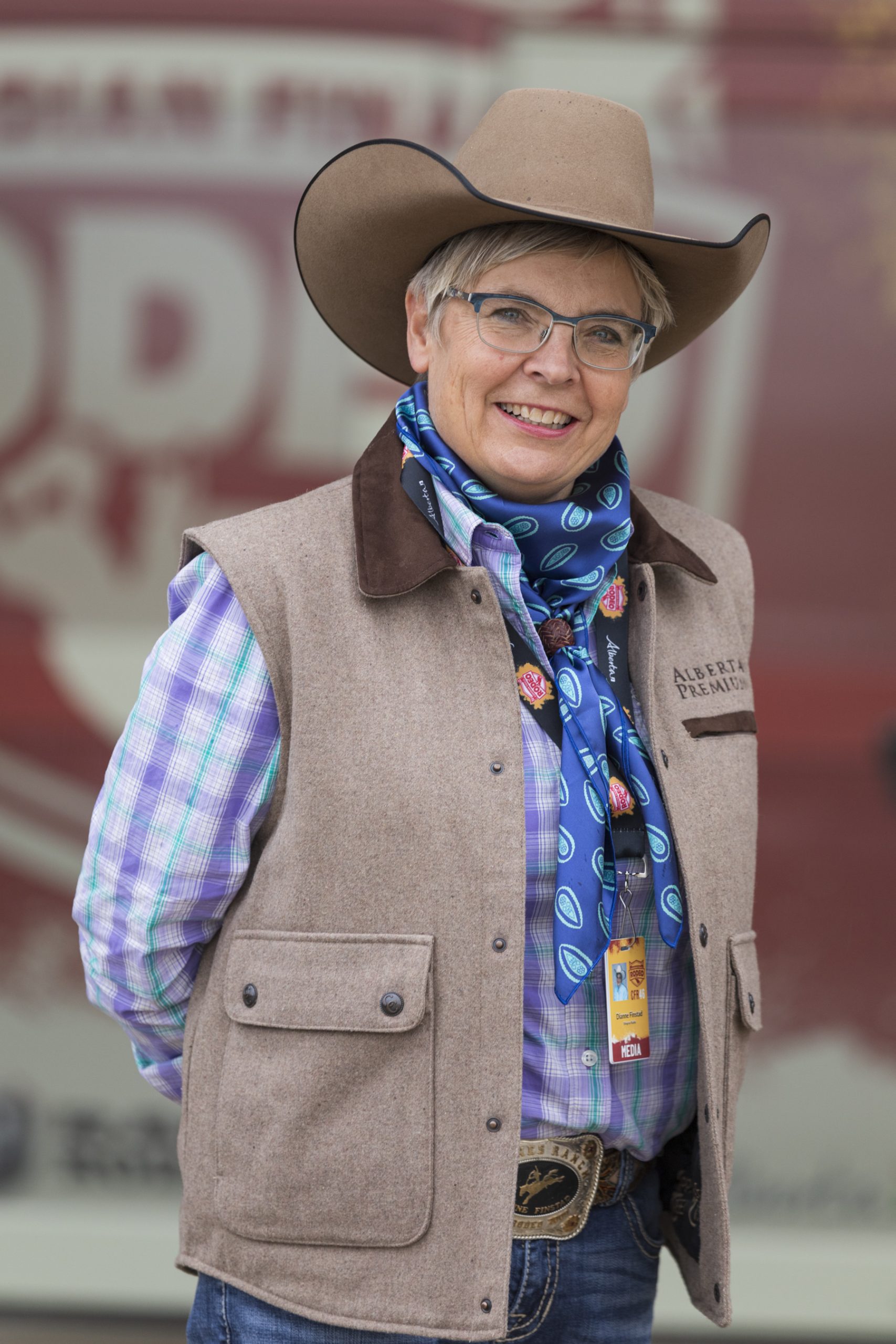