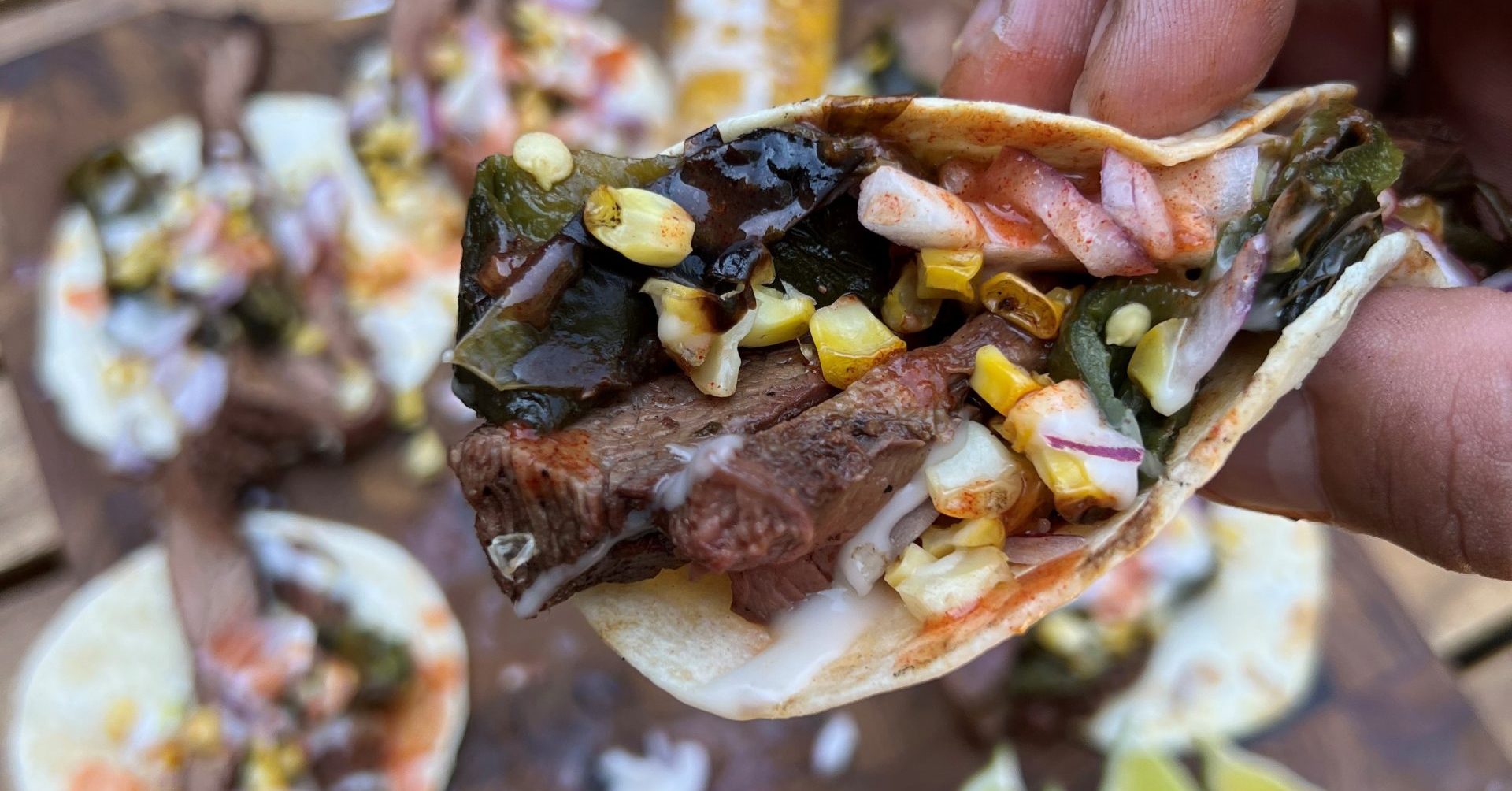 (Mel Chmilar Jr./Dark Side of the Grill
August 21, 2022 Inspiration

The Breakdown – with Corey Meyer

Skirt steaks are almost a forgotten cut. They are the diaphragm muscle of the beef and have a very obvious and prominent grain which makes them easy to slice. They are a very similar cut to the Flank steak but rather than being oval in shape, they are long and narrow.

While they aren’t an overly tough steak, they do have a bit of a chew to them which is why most people tend to marinade them. While they can be served on their own as a proper steak, you would most commonly find them used in dishes such as tacos.

Get Grilling – with Mel Chmilar Jr.

After picking up a nice plump and long skirt steak from my butcher, I like to get it started in a house-made marinade. Starting with a few fresh-squeezed limes right into a ziploc bag with the skirt steak inside, then we are going to get some crushed garlic cloves.

Now let’s hit it with some chipotle pepper powder (3 teaspoons), and a sprinkle of sea salt (1/2 teaspoon). If you have chamois, now is a great time to splash it in there, but if not, a splash of Clamato juice will do.  Squeeze and massage the marinade into the meat and let it sit in the fridge for a minimum of four hours or, if you can, leave it over night.

Time to get that grill fired up. Heat your grill to 350 degrees and place the skirt steak indirectly on the heat. You can let it slightly seam sear and cook through until you’ve reached an internal temperature of 110 degrees.

Once your skirt steak is cooked to your liking, finish it off over the flames! We want to gently char the edges of it while keeping the inside somewhat rare. Pull this steak of the flames when it reaches an internal temperature of 130 and let it rest for five minutes before you prepare to slice it.

For my tacos, whether it’s a corn or wheat tortilla, I like to heat them up on the flames. Toss that steak in there with a splash of hot sauce some cotija cheese crumbles fresh cut red onions cilantro and a crema to take it home. Trust me this summer dish will have you making skirt steak a regular thing in your house!

Corey has worked as a butcher at ACME Meat Market in Edmonton since 1996, and ACME has served customers since 1921. Known as “Corey the butcher,” this beef guy is an outspoken industry supporter and member of Canada’s Team entry in the World Butchers Challenge.

Mel is a pitmaster, caterer, live fire and barbecue cooking instructor, and social media personality. Follow Mel on Instagram and YouTube for all kinds of grilling hacks.

This article was first published in Volume 2 Issue 3 of ABP Magazine (July 2022). Watch for more digital content from the magazine on ABP Daily.