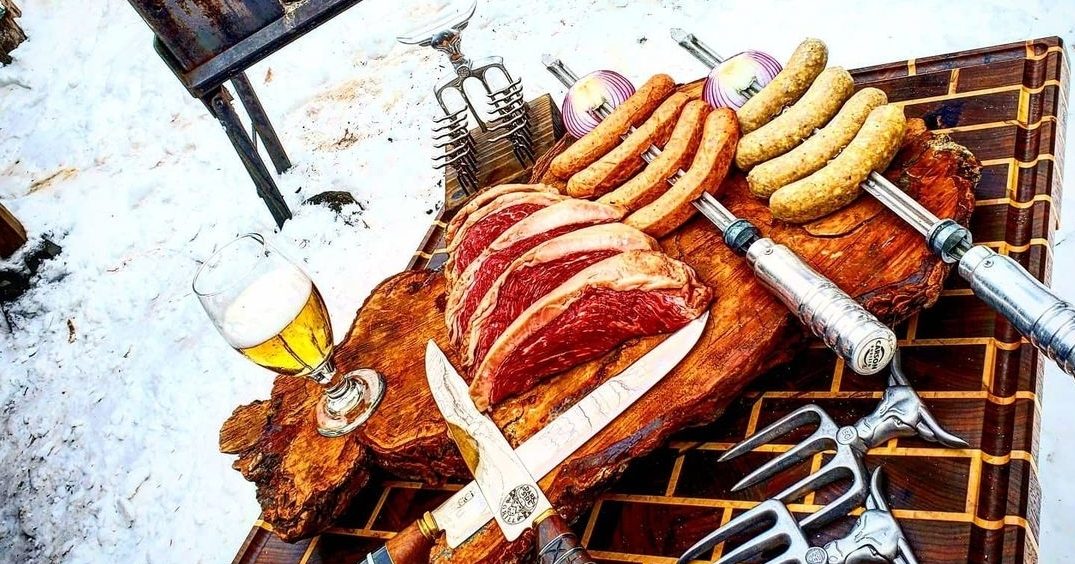 (Mel Chmilar Jr./Dark Side of the Grill)
February 24, 2022 Trailblazers

Shake the winter blues with some tropical BBQ

In the November issue, we met Albertan Mel Chmilar Jr., who welds by day and grills by night, and shares his experiences socially as darksideofthegrill. Rather than letting a little winter weather bring BBQ season to a full stop, he suggests shoveling a path out to the BBQ to keep firing it up year-round. Here are some tips and recipes for others who may want to follow suit.

When picking a BBQ with winter grilling in mind, look for something insulated, with a thicker steel or cast aluminum shell. “They retain heat a lot better than thin stainless,” says Chmilar.

He cooks with a Big Green Egg ceramic grill, and recommends it. “It doesn’t matter if it’s plus 50 or minus 50, once they’re warm, they run regardless of the temperature,” he says.

Get out of the roast rut with a BBQ pitmaster

To prevent the lid from freezing closed, use parchment paper, and put parchment over the gaskets when you shut the grill down to prevent those from freezing, suggests Chmilar. To keep your BBQ warmer, create wind blocks around it using whatever supplies you have available.

If you have a welding blanket, says Chmilar, throwing it over a pellet smoker will winterize and make it work more efficiently at the same time.

Steaks and roasts are great year-round, but going tropical is a real treat mid-winter, and “a good way to shake that winter vibe,” says Chmilar.

Tropical pineapples are in season and inexpensive this time of year, and delicious when marinated before grilling. “My favourite thing is to marinate pineapple in fireball whiskey for a day or two in a Ziploc bag, and then grill it. It gives it a beautiful cinnamon flavour,” he says.

For a family friendly version, marinate in maple syrup with heavy cinnamon. “It grills up fantastic,” says Chmilar. “You can use it on skewers, in tacos, on salad, however you want to.”

Skewers are a favourite of Chmilar’s this time of year. “When it’s minus 20, I really enjoy making kabobs. I put marinated pineapple cubes in between beef cubes from a decent marbled cut, with mushrooms and purple onions. It’s a hard win. Every time I serve it, people love it,” he says.

Another way to make pineapple great is to use it in tacos for a brilliant sweet and savoury flavour mash-up. “Slow cook a beef chuck roast on the grill heavily coated in taco seasoning. Once it’s prepared, shave it for tacos, and serve it with grilled pineapple,” he suggests.

Here’s a winter pro-tip: “Winter weather makes cold smoking a breeze,” says Chmilar. “You can cold smoke just about anything. Lightly smoking beef or a roast before you cook it gives it an amazing taste,” he says.

Start with a steel smoking tube (available online or make your own with aluminum foil), fill it with pellets or wood chips, light up the end, and place it on one end of a cold grill with meat or cheese on the other end.

Chmilar suggests cold smoking salmon or cheese. “Any kind of cheddar, gouda or mozzarella is fabulous—pick a good brick cheese, and the bigger the brick the better.”

Plans to Light up the 2022 Grilling Circuit

A self-taught pit master and live fire cook with a large social following, Chmilar plans to both compete and judge on the competitive grilling circuit in 2022. He is a certified KCBS judge (Kansas City Barbeque Society judge), has taught live fire/BBQ classes, and was a chosen competitor at the World Food Championships.

“I love to go to these events as a judge because that way I get to taste everybody’s foo. But I also plan on doing at least one or two competitions this year myself.”

On his must visit list for 2022, Chmilar includes Porkapalooza in Edmonton and BBQ on the Bow in Calgary. Competitive cook-teams are usually three to eight people, and Chmilar says he hopes to shadow with a few bigger teams, in addition to putting together a team of his own. Wherever the competitive season takes him, he says, Alberta beef is always on the menu.